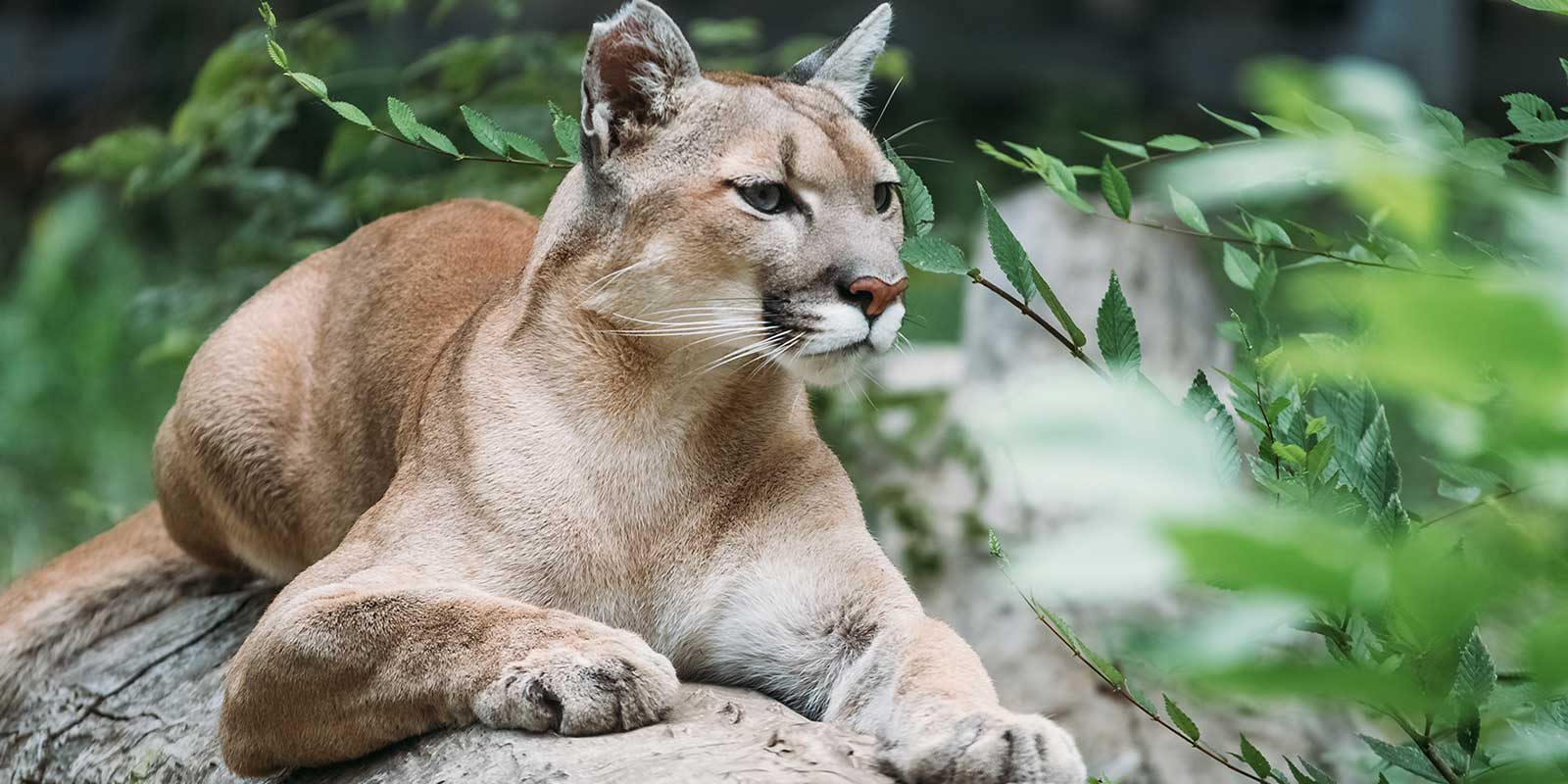 Mountain Lions in your Parks: What you Need to Know

They’re one of the more magnificent wild creatures found in Sonoma County’s Regional Parks – and one we’re unlikely to ever see.

Tawny, majestic and amazingly athletic, mountain lions (also called puma, panther or cougar) are native to California and at home in our rural landscape, including the parks. But by nature, they’re highly elusive. So, lion sightings are extremely rare, even for parks staff and wildlife experts.

Mountain lions are also strong, skillful ambush hunters, so a certain amount of apprehension about bumping into one on trails is reasonable. There is no record of any person being attacked by a mountain lion in parks here. But knowing how to behave if you do meet one, and how to live with lions in the neighborhood, is still the best way to protect both human and cougar families. Here’s a rundown on their key features, and recommended safety tips.

Yes, and not just in appearance. Behavior captured on Sonoma County Regional Parks’ trail cameras show mountain lions stretching their limbs and backs and yawning and lolling around, just like house cats do. They have retractable claws like kitty, too. And mountain lions can purr.

They prefer to avoid people

We’re learning a lot about how our local mountain lions behave thanks to long-term research with local trail cams and GPS tracking collars set by Quinton Martins, Ph.D, of True Wild and the ACR Living with Lions Project. One surprise they’ve revealed is how close hikers and bikers in some parks come to lions without ever knowing it. It’s a real demonstration of how good the lions are at avoiding people.

That avoidance is part of their natural behavior. Mountain lions prefer to go unnoticed. They once had to compete with much larger California predators like fearsome cave lions, saber-tooth cats, dire wolves and fierce grizzly bears. The cougar evolved to be a cautious animal, more timid than the world’s other large felines.

Even when they’re trapped and caged, experts who work with our native lions say, mountain lions are inclined to withdraw rather confront their captor. Nonetheless, as predators they are incredibly effective.

The lion’s skill at evading humans may be one reason they’re still here, after all of California’s other native large predators are gone. 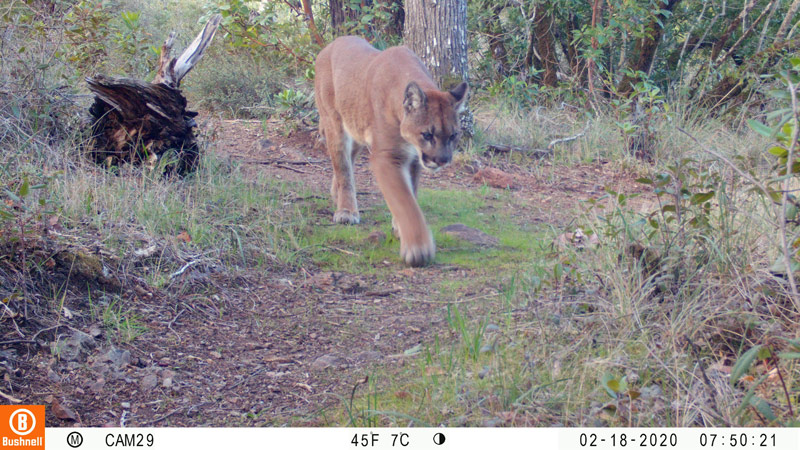 Today, their important role in the environment is better understood. As a top wild predator in California, mountain lions are critical to maintaining balanced, healthy wild habitat.

Up close, mountain lions are awe-inspiring. They can grow to nearly 7 feet long from nose to the tip of their long, heavy tail. For scale, that’s longer than the average mattress. Lions have acutely sensitive hearing, can fully rotate their ears to scan for and pinpoint sounds, and have outstanding vision, even in low light or near darkness. And their physical abilities are truly superhuman. Mountain lions can leap over a 12-foot fence from a sitting position, pounce more than 20 feet at a run, and in a sprint hit 45 mph.

But they live mostly solitary lives in large home ranges. Individual mature lions claim territories and defend them aggressively from other lions. A female’s home range is an area of about 50 square miles, while a male’s territory can be 150 square miles or larger, typically overlapping those of three or four females. Active lion territories cover most of Sonoma County, where there’s suitable vegetation cover.

To get around, lions prefer to avoid open spaces and urbanized areas, and keep to places where vegetation provides good cover, such as creeks and streambeds, and overgrown, wild and wooded areas. 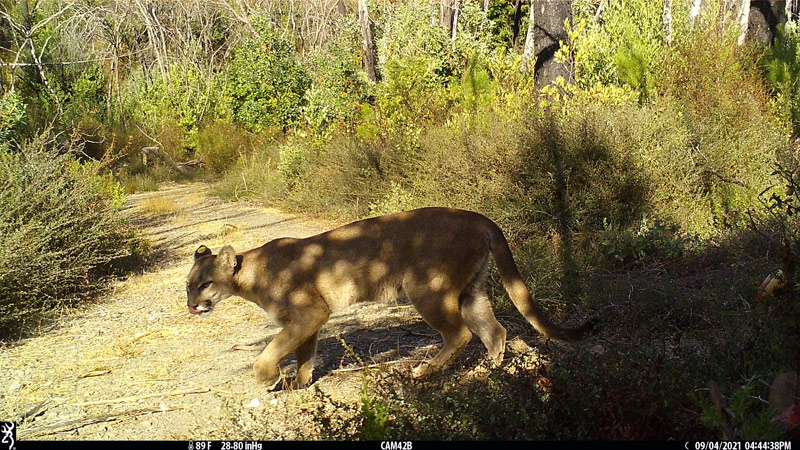 How many lions are there in Sonoma County?

Sonoma County is probably home to about 75 mountain lions, based on estimates from habitat models.

Is it safe to share the parks with mountain lions?

Yes, with the proper precautions (see below) lions do not pose a significant hazard. It’s worth remembering, the lions were here before people moved in. They’re now used to being around people a lot of the time. One lion territory can contain 10,000 or 15,000 human properties, but the lion will avoid us as much as possible.

Those teeth, those claws – aren’t they dangerous?

Mountain lions are perfectly designed to survive by hunting and bringing down animal prey. But humans are not lion prey. Lions rarely attack people, and it’s extremely rare for someone to be killed by a mountain lion. For comparison, many more Americans are killed by pet dogs, and by falling trees, than by mountain lions. In the past 65 years, the Department of Fish and Wildlife has recorded only 20 verified lion attacks in California, and only three fatalities in the state in 130 years. 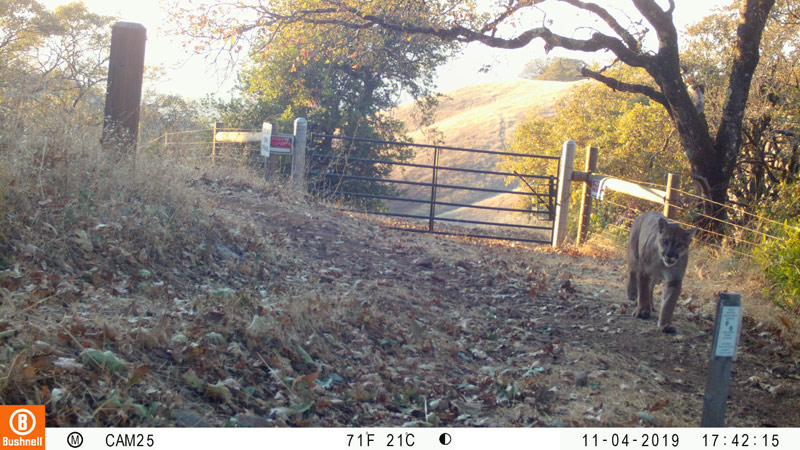 What are they eating?

Mountain lions eat meat, and they’re opportunists. They will eat anything from mice to racoons to coyotes – and occasionally pets and small livestock that have been left outdoors in lion country unprotected. But for nearly 75 percent of their diet, deer is on the menu. Where there are deer, there likely are mountain lions. A lion may eat one deer a week. 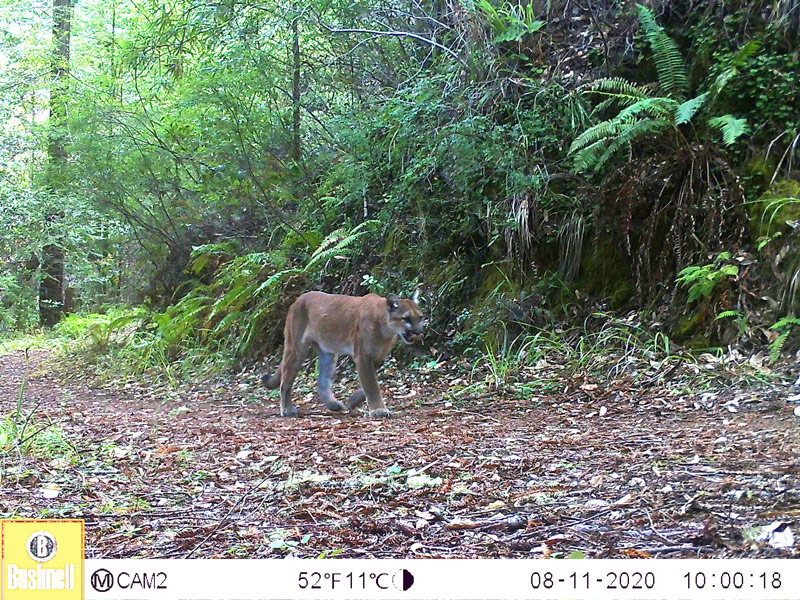 What if you encounter a mountain lion?

Stephen Nett is a Bodega Bay-based naturalist, writer and speaker.