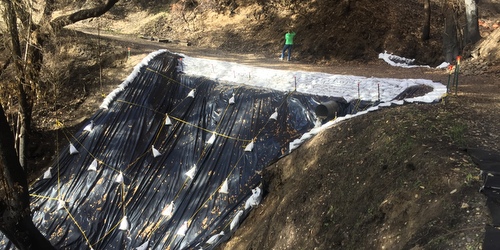 On October 8, 2017, the North Bay fires started which eventually killed more than 40 people, destroyed over 6,000 structures in Sonoma County, and burned nearly 2,600 acres of Sonoma County Regional Parks. The fires burned for many days during which time tens of thousands of people were evacuated or displaced from their homes. In the parks, tree stumps underground continued to burn up to 3 weeks after the fires began.

Nearly all of the 860-acres, or 93% of Shiloh Ranch Regional Park burned. Three wood retaining walls were burned including one wall with a large 48” culvert.

Project completed in fall of 2019.