This oceanfront park in the northwest corner of Sonoma County borders the Gualala River and Mendocino County. The park features an expansive beach and estuary, where the river meets the sea, and a small, forested campground along the river. Trails connect the beach and campground to coastal bluffs and to The Sea Ranch community just to the south.

The park is popular with day hikers, beachcombers, picnickers, birders, whale-watchers and fishers, yet is rarely crowded. A visitors center is open most weekends and includes information on North Coast history, Native Americans, the Gualala River and the marine environment.

Gualala Point Regional Park features a small campground set among the Gualala River redwoods on the east side of Highway 1. Reservations are required.

Nineteen sites are available for tents, trailers, and RVs. Electrical hook-ups are not available. Generator hours are 8 a.m. to 8 p.m.

Six sites are walk-in, located in a grove of bay trees a short distance from campground parking. One site is reserved for hikers or cyclists.

Restrooms feature flush toilets, electrical outlets, and a coin-operated shower ($2 for 5 minutes). There is also a dump station.

Gualala Point Regional Park offers 2.9 miles of trails along coastal bluffs and above the Gualala River.

From the parking area, the beach is reached via a paved, ADA-accessible trail that crosses meadows of tall grass and groves of gnarled cypress.

Unpaved paths also cross the headlands to the beach, weaving along the cliffs and offering dramatic views of the sea and offshore rock formations. A bench at Whale Watch Point is a great place to pause and look for migrating whales or enjoy a sunset.

Gualala Point's campground on the east side of Highway 1 is connected to the park's day-use area on the west side by an unpaved trail that follows the Gualala River and skirts under the highway bridge before climbing to the parking area near the visitor's center. 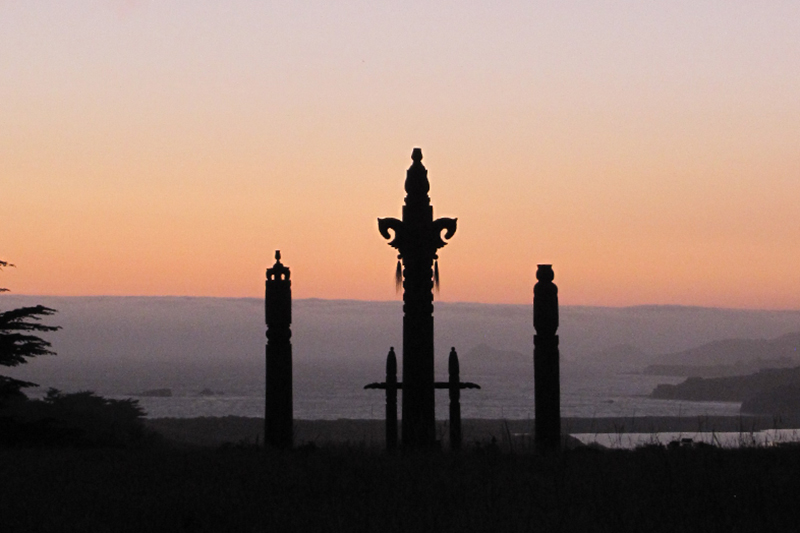 The ceremonial posts in the meadow near the vistor center were created by wood carvers from the Sakha Republic in far northeastern Russia. The intricately designed poles are known as serge (pronounced "sayrgay") and were carved at the park during the Days of Sakha cultural festival in 2014.

The festival brought a delegation from Yakutsk, the Sakha capital, to the Sonoma Coast to pay tribute to their heritage in the area. (The Sakha people first arrived in Sonoma County in the early 19th century as part of the Russian settlement of Fort Ross.)

For the festival, Sakha craftsmen created the serges from a 40-foot Douglas fir over two weeks. The serges were dedicated on the summer solstice with traditional Sakha blessings, dancing and shamanic rituals. In Sakha tradition, serges are hitching posts placed near homes, and their designs symbolize the human desire for survival.

As a partnership with Friends of the Gualala River, and Further Reach Internet Service, a weather station has been installed at the Gualala Point Regional Park Visitor Center to provide real-time local weather information.

Features accessible campsites and a 1.75 mile paved trail with gentle grades that connects the visitor center and parking area to the bluff top at the beach. Other native earth trails in this area have gentle slopes and are relatively firm and stable.

All-terrain wheelchairs are available on a first-come, first-served basis. Park staff will assist with the check-out/check-in process. 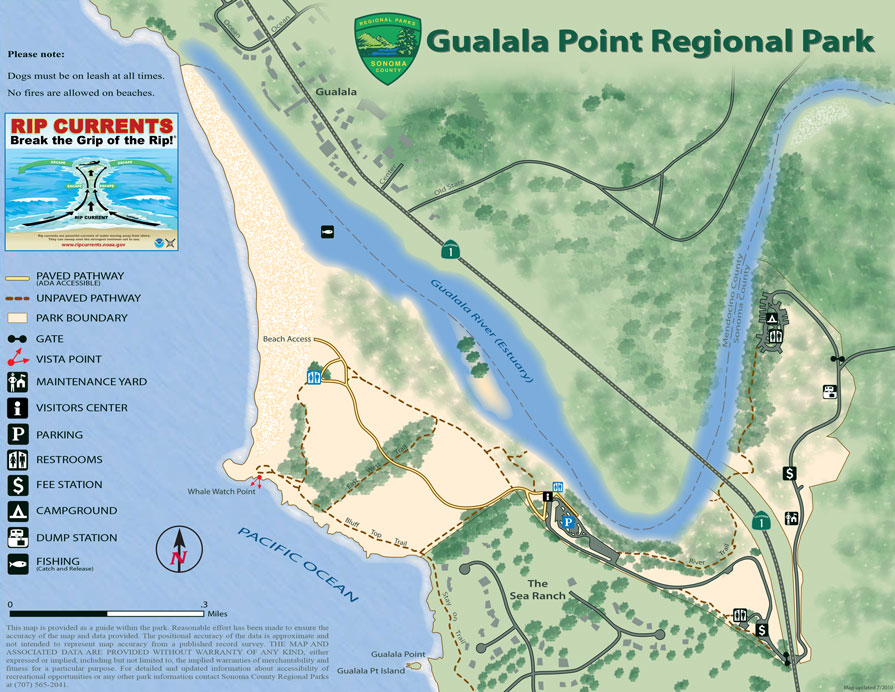 Gualala Point Regional Park offers 2.9 miles of coastal trail along bluffs, through meadows, and above the Gualala River. Gualala Point Beach is easily reached via a dirt trail or ADA accessible paved path, and in general the trails throughout the park are relatively flat. The campground located on the eastern side of California State Route 1 is connected to the day use part of the park via a short trail through coastal forest. Gualala Point Regional Park may be connected to either Salal or Walk On Beach access trails via the Bluff Top Trail. The distance from Gualala Point to Walk on Beach via the Bluff Top Trail is 3 miles. Please note that fires are not allowed on beaches.