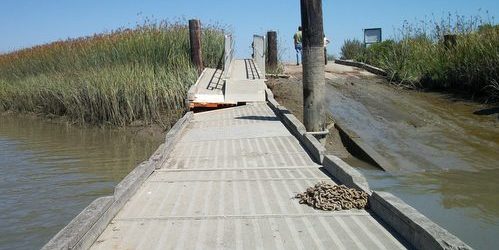 The State Department of Fish & Game which acquired the 4.4 acre property in 1961 and the County of Sonoma entered into a Cooperative Agreement for the Operation & Maintenance of Hudeman Slough Angling Access Area on April 3, 1962. The County agreed to maintain the improvements upon completion which included, “keeping the access road, parking area, launching ramp, loading float, sanitary facilities, and other improvements developed by the State in good repair and free from unsightly conditions and debris accumulations.” The County also agreed to keep it open at all times for public access without charging for use. This agreement expired in April 1982 after 20 years.

By 1986, repairs were needed at Hudeman Slough. Original construction consisted of a wood single-lane boat ramp, boarding floats, a graveled parking area, portable restrooms, and fencing. Regional Parks proposed increasing the height of the levee 2 feet along a 1,200 foot stretch to protect from frequent flooding; renovating the wood ramp and extending the top elevation to the new levee crown; constructing a new float, gangway and access pier; constructing a new entrance road and paving the entrance road, the boat ramp access and the parking area; constructing a new restroom facility; and raising the float guide piles and the access walkway.

In 1987 the operating agreement was extended to 2022. In 2001, Regional Parks, with funding provided by the Wildlife Conservation Board (WCB) made ADA improvements at the facility which included gangway replacement, safety curb and transfer module, pavement repair, and ADA parking improvements.

By 2012, all of the facilities were showing their age as a result of vandalism, tidal forces, and general use. It was recognized there was a fundamental problem with silt deposition at the site, rendering the boat ramp difficult to use due to mud accumulation. In addition, the facility is no longer compliant with ADA due to the theft of structural components.

On November 29, 2012, WCB approved $50,000 from the Wildlife Restoration Fund (Local Assistance) for design plans and CEQA documentation for the currently planned, significant renovation project at the Hudeman Slough access point.

This renovation project involves demolition of the existing boat ramp and dock, and the construction of a new ramp and dock system. The new construction will enhance the functionality of the launch facility, minimize the siltation issue making it easier to maintain the ramp, and generally elevate the experience and use of the facility while discouraging the vandalism that has plagued the site in the past.

Additional project components include adding a low free-board kayak launching dock to provide an accessible (ADA) launch point,  a permanent restroom building, resurfacing the parking area, and the provision of 6 primitive campsites including a camp host site that would accommodate a 28’ trailer.

The preliminary project planning and environmental analysis was funded through a grant from the Wildlife Conservation Board (WCB). Additional grant funding by WCB allowed the development of design and engineering plans, as well as the necessary environmental regulatory permitting required to construct the improvements.

Regional Parks has applied for the Wildlife Conservation Board’s Public Access program and the Division of Boating and Waterways’ Boat Launching Facilities program for the construction of improvements at Hudeman Slough Boat Launch. The Hudeman Slough access point has been identified as part of the San Francisco Bay Area Water Trail Plan, and, as such, will be eligible for future funding.