Tolay Lake Regional Park is approximately 8 miles southeast of downtown Petaluma. At 3,400 acres, Tolay Lake is the largest of Sonoma County's regional parks. It is named for the seasonal lake that forms in the valley between its hillsides.

The park offers trails for hiking, mountain biking, and horseback riding. It also provides habitat for a variety of wildlife, especially golden eagles, burrowing owls, and other birds of prey.

With the park's daily opening in 2018, visitors gained access to the southern 1,600-acre section of the park via an extension of the West Ridge Trail. The trail provides an 8-mile round-trip excursion to the far reaches of Tolay Creek with views of the Tolay Valley, Petaluma River Valley, and San Pablo Bay.

Another popular destination is the Three Bridges Vista Point. This 5-mile round-trip hike follows Causeway Trail across Tolay Lake and climbs through an oak woodland to join the East Ridge Trail. Views take in the Richmond-San Rafael Bridge, Bay Bridge, and Highway 37 overpass.

Visitors may encounter cattle grazing along trails. Cows are not aggressive by nature, but if aggravated or threatened, they will defend themselves. Tips for sharing trails with cattle:

The park is known for its Native American history. Tolay Lake is a spiritual center and a cultural landscape for the Federated Indians of Graton Rancheria, who are comprised of Coast Miwok and Southern Pomo tribal citizens. Coast Miwok people are the original descendants of the Tolay Valley. The Federated Indians of Graton Rancheria are the county's partners in stewarding the park’s cultural and natural resources.

“The lake and surrounding area was highly sacred and was considered one of three areas in all of Northern California where Indian doctors from different tribes convened for sacred ceremonies and the exchange of ritual objects and songs for the purpose of healing,” according to Greg Sarris, chairman of the Federated Indians of Graton Rancheria.

Tolay Lake was historically one of Sonoma County's largest freshwater lakes. It is a naturally occurring lake that forms in wet seasons and draws down in dry seasons. Earlier land owners altered the lake to accommodate ranching and farming. Restoration plans will return the lake to a natural system. Tolay Lake is not a recreational lake, and the lakebed is not accessible to the public.

The park is comprised of the 1,737-acre Tolay Lake Ranch property purchased by the Sonoma County Agricultural Preservation and Open Space District and transferred to Regional Parks and the 1,665-acre Tolay Creek Ranch property purchased and transferred by the Sonoma Land Trust. Acquisition of these lands has protected the bulk of the Tolay Creek watershed, which drains to San Pablo Bay. The park provides critical habitat linkages and wildlife corridors.

Hours
The park is now open daily. Hours are 7 a.m. to sunset. 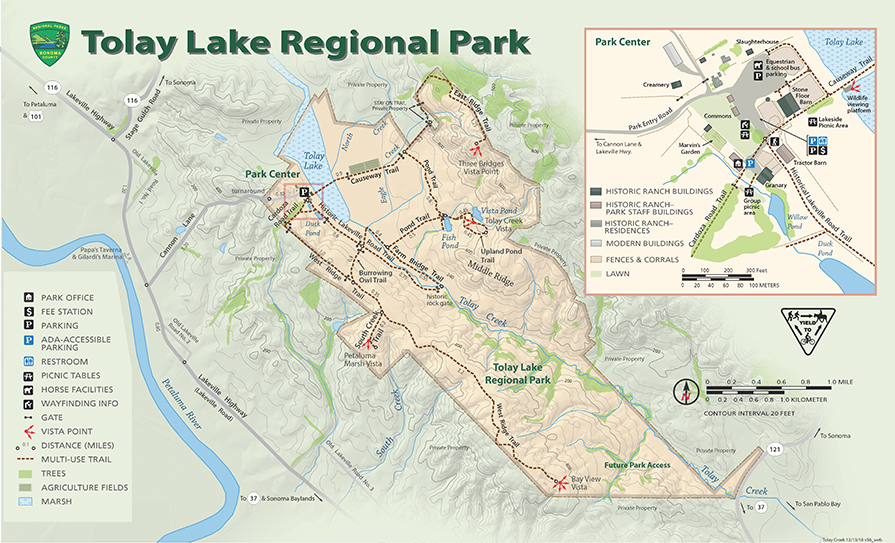