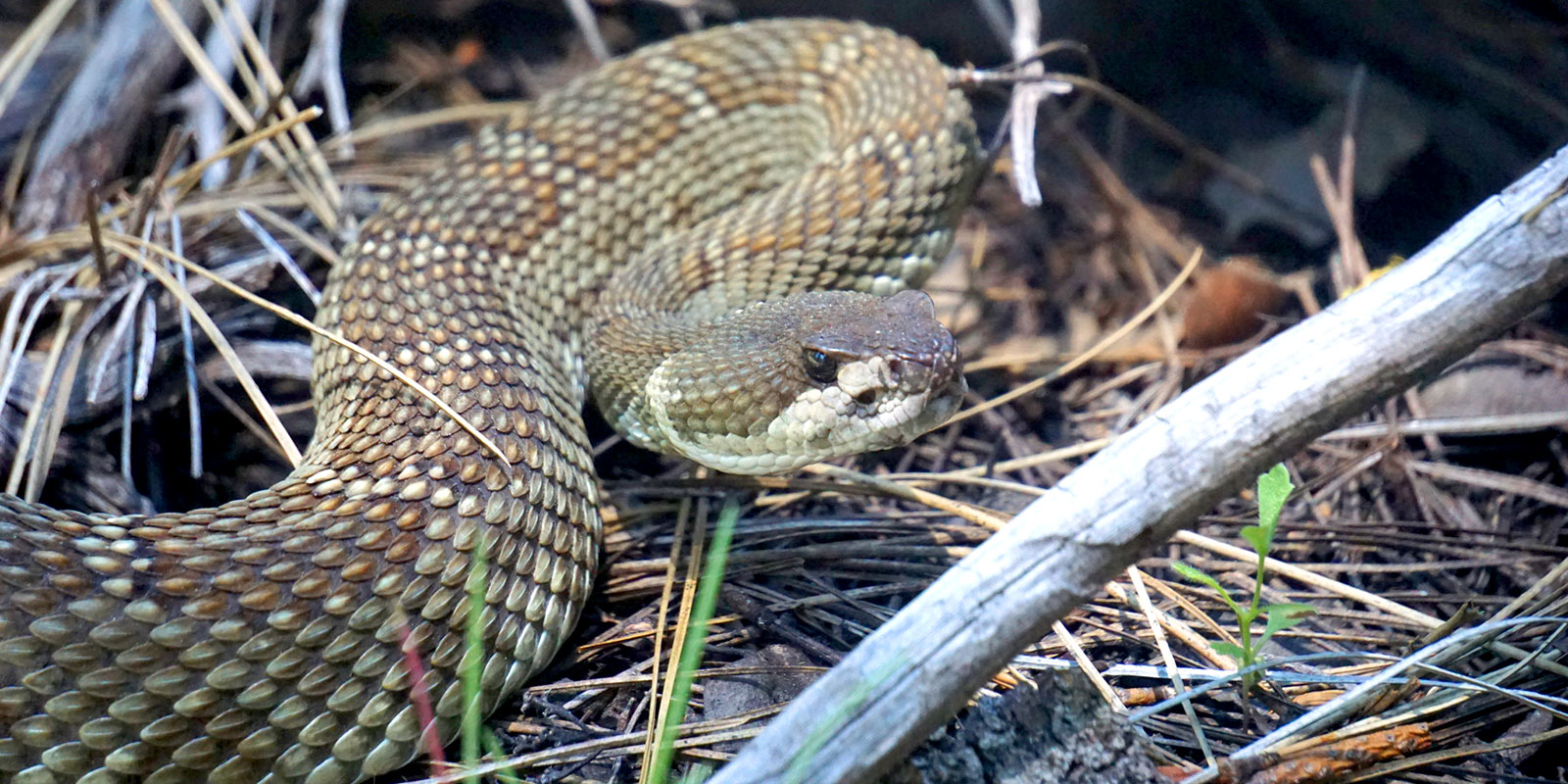 Snakes on a Trail: Tips for Hiking in Rattlesnake Country

Summer is the perfect time to hit the trails to hike and explore. Remember, we share Sonoma County's parks with wildlife, and one of the local residents active this time of year, the rattlesnake, has a formidable bite.

How do I know if it’s a rattlesnake?

At a glance, it may be hard to tell our 33 species of local snakes apart. Most are harmless. But a rattlesnake has a distinctive triangular shaped head, with a tapered neck and thick body, large scales, and (unless they lose it, which they can) a rattle at the tail.

Not sure? Stay away. 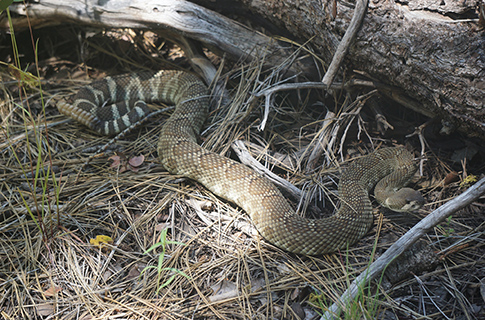 What’s a rattlesnake doing on the trail?

Rattlesnakes can’t regulate their temperatures, so they look for sunny spots to warm up after a cool night. A bare sunny trail or open space is a perfect sunning spot, so stay alert when walking in the cooler parts of the day.

When it’s really hot, rattlesnakes need to find sheltered places out of the sun to keep from overheating: shady places along or under logs, rocks, heavy shrub or woodpiles, even the foundations of buildings.

While they can be out any time, rattlesnakes are most active in the morning and from dusk into the night. They hunt mice and rodents in darkness because they can sense body heat with special organs on their face.

What should I do if I see a rattlesnake on the trail?

First, back away. Rattlesnakes aren’t aggressive to humans unless threatened or frightened. They eat mice and rodents and are shy of bigger animals. If they sense you, they will usually try to escape. Give them space to do so.

Don’t wave things at them because that may agitate them. Don’t try to push them off the trail with a stick – that’s often how people do get bitten.

Shouting won’t scare them off either - they don’t have external ears – but they can “hear” really well by picking up vibrations in their jaw and bones. They can sense the impact of feet on ground, which helps them escape before you get there. If they don’t move off on their own, you can try stomping - at a safe distance - to give them the signal. 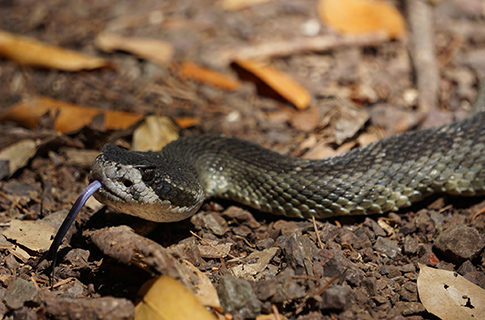 How far away do I need to be to keep from being bitten?

As a rough rule of thumb, a rattlesnake can lunge about two thirds of its body length. It's a good idea to stay as far as possible from any rattlesnake, aim for at least 10 steps away, to ensure safety no matter which direction the snake moves.

What if it doesn’t move?

If the snake won’t move off the trail, it’s safest to wait it out or turn back. Don’t try stepping over or around it, unless you can bypass it at a safe distance – and watch where you step. Keep an eye on the snake in case it decides to escape your way. When motivated, they can glide fairly quickly.

How dangerous are they?

A rattlesnake bite can cause painful swelling, bruising and tissue damage. Rattlesnake venom can be lethal after several hours if not treated, but bites are rarely fatal because antivenom drugs are so effective.

The good news is the odds of being bitten by a rattlesnake are low. In a state of 39 million people,  approximately 300 rattlesnake bites are reported annually to the California Poison Control System.

Do rattlesnakes warn you by rattling?

The rattlesnake’s rattling sounds like a jet of water hitting a spinning fan – and while they use it as a warning when threatened, they may not take the time to rattle if they’re suddenly startled. Snakes can lose rattles, too, so don’t count on hearing them. 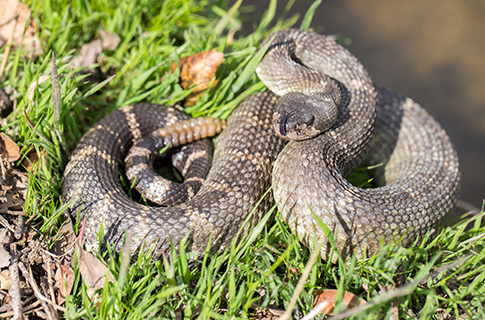 What should I do if one bites me?

Act quickly to get help, but stay calm. Get medical attention as soon as possible. Antivenom sweeps up the venom.

Exertion spreads the venom faster, so keep your heart rate as slow as you can. Don’t waste time trying to catch or kill the snake. Remove rings, watches or bands that may restrict swelling.

Keep the bite about level with your heart. Do not apply a tourniquet or cut the bite to get the venom out. Don’t apply ice or drink alcohol.

What should I do if I’m far from help?

Use your phone to call for help and follow the instructions you’re given. Otherwise, walk out as calmly as you can to the nearest phone signal or assistance. It’s better to move toward help than wait, if you’re uncertain when help may come.

How do I keep from being bitten?

A California study found two-thirds of rattlesnake bites were on the hand or arm, and 80 percent of victims were young men.  Most bites occur from handling or accidentally touching snakes. 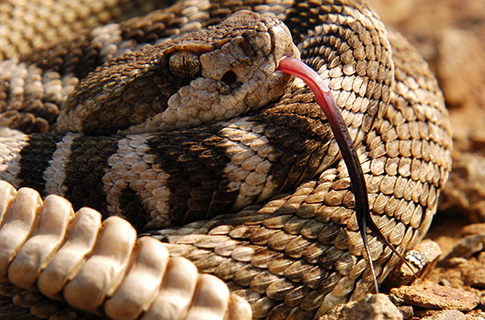 What about my dog?

Keep dogs on leash so they don’t investigate snakes. If bitten, get them quickly to a vet for antivenom shots.

Each year, rangers, other parks staff and, yes, some hikers report seeing rattlesnakes along trails or in other park areas. If the snake is in a populated spot, rangers will relocate it to a safer location.

Again, the good news is rangers can't recall ever responding to a report of a snake bite.

Stephen Nett is a Bodega Bay-based naturalist, writer and speaker.